After 5 years of patiently waiting, I was finally given the nod, followed by the secret handshake. I had made it into one of the most prestigious waters in Cheshire and I felt very privileged to now be a member of the syndicate.

Although there was nothing of any size in the lake, it offered the perfect sanctuary away from other anglers who would be only too willing to jump in on your hard work if you got something going!  There were no rules here, only etiquette. The water was not too far from my home so I had applied with the winter months in mind, it’s all very well driving 200 miles in the summer months, grinding it out on a big old pit, but in the winter I like to fish a little closer to home (usually because I’m fresh out of holiday entitlement by December).I already knew at least half a dozen members and decided to meet up with a couple of them on my first session in June. Like I said, I joined with a view to fishing the winter but I couldn’t resist an earlier session and experience the lake in its summer bloom.

To say the lake is well out of the way would be an understatement, the track that led through the woods seemed to go on for miles. I let the car roll in neutral as the lake came into view and then I crawled into the drop off space next to the syndicate hut. I was greeted by Stumpy and Gadget who were sat at a table in the afternoon sun eating piping hot pizza they had cooked in the oven and washing it down with cold Cider, it appeared I was just in time for a slice and a cold one.

From the comfort of a chair at the table I could look out over most of the lake, so whilst we ate and drank I could also keep an eye out for anything fishy, this was syndicate life of a different kind, I finished my Cider and went for a lap of the lake, the fish were keeping their heads down that was for sure but I decided I liked the look of a swim known as “The Island”, besides it was a purely a social weekend and since the fish were not showing, one swim was no better than another and I'll admit the swim had a certain appeal!

I flicked a marker around the swim and as I expected, the bottom was featureless, well it was if you were looking for something obvious but many years spent fishing silty lakes and meres had taught me all I needed to know about finding feeding areas on “featureless” lakes. A small area at 35yds was far cleaner than anywhere else in the swim, so up went the float and out went 3kgs of boilies and 1kg of small halibut pellets. I had done my homework on the place and knew that nobody used much bait at all (4kg’s of bait was a lot of bait for those fish to see in one sitting). I cast two bare leads, one either side of the float, clipped and marked them and cleared the swim of lines. I then baited three rigs, putting them safely in the butt rings and returned to the hut to continue with the social.

With a half hour of daylight to go, I made my way back to The Island and cast out two bottom baits complete with two bait stringers to the baited area and followed them up with a couple of pouches of bait. The third rod was cast off to the left on a high attract single pop-up and a little further out at around 40yds.

After a tough week in work and a few beers I was more than ready for some shut eye and it wasn’t long before I was out cold. I came around to the sound of a howling buzzer, the right hand rod was melting off! I bent into the fish and straight away knew it was one of the better fish in the lake. I could hear Stumpy and Gadget talking in the darkness so I checked the time, it was only 11pm, I couldn’t believe it, it’d only been cast out two hours! The fish plodded around the swim for a good 10 minutes and when it finally rolled just out of netting range I knew it was a goodun. A final short run down the right margin took the last bit of fight out of her so the next time she neared the net she was mine. I flicked on my torch and it appeared I had caught the lakes biggun and my first fish from the water too. She weighed in at 32lb 08oz and I was well and truly buzzing. A few shots were taken before I slipped her back, it was handshakes all round and then time to get the rod back out there hoping for another.

I awoke at 8.30am to the left hand rod on the single ripped off, the fish felt pretty good and kited powerfully round to my right before clipping a few lilies and slipping the hook, “oh well” I sighed (or words to that effect).

As I began tying on a new bait, Stumpy called out across the lake “bacon sandwiches” and pointed to the hut, well who could resist so I wound 'em in and made my way around for breakfast. As I got closer to the hut I was could hear abuse coming my way…“what the hell do you think your doing” shouted Stumpy, cutting me off before I could reply. “Winding your bloody rods in when your catching, don’t ever do that again, leave 'em out, there’s no rules on here for a reason,” he said, bursting out laughing. “Have your breakfast and then go and put em out, then get your arse back here”. Well who was I to argue…

The rods were back in position over a big bed of bait by 11am and I was back at the hut listening to tales of the rarely caught “Black Common”, it was exciting stuff but it did seem strange to be sat on the opposite side of the lake to my rods.

Mid afternoon came and it was time to fire up the syndicate BBQ, Wilson had arrived with food and Stella, and Stumpy was foaming at the mouth. Before long, plumes of smoke poured from the BBQ as Stumpy cremated Wilsons prize venison burgers. There was only tomato sauce on offer so I had to go and retrieve my smokey bbq stuff from my swim. As I arrived back at the hut, Wilson held out a cold can of Stella but as I reached for it one of my rods absolutely ripped off. I turned on my heels and sprinted round the lake, the buzzer didn’t stop howling the whole time. On the pick up I was flat rodded for another 10yds or so before she turned and began to plod around out in the middle. Stumpy and Wilson soon arrived hanging onto each other and gasping for air, from the look of them I thought an ambulance might be needed. Thankfully Wilson got his breath back and took charge of the net. A good ten minutes of powerful runs and heavy plodding passed by until finally the fish surfaced just out of netting range, I began to walk back so couldn’t see the fish. Wilson mentioned something about an upper double common that looked black as coal before the rod flattened and the fish powered off on a 20yard run. I knew that it was no double and so did Wilson, I wasn’t daft, he just didn’t want me to panic. Once more the fish neared the net before powering off again, this time the comments were regarding the size of its pec fins. As it approached the net for the third time Wilson expertly scooped her up. Stumpy confirmed that I had banked none other than “The Black Common” and she weighed in at a very nice 30lb 8oz. A very clean mint condition fish and although appearing jet black on the bank, for some reason she came out a lot lighter in the pictures!

What a weekend it turned out to be! A great social with great company. The lakes big mirror and the rarely caught Black Common on my first session, lucky me 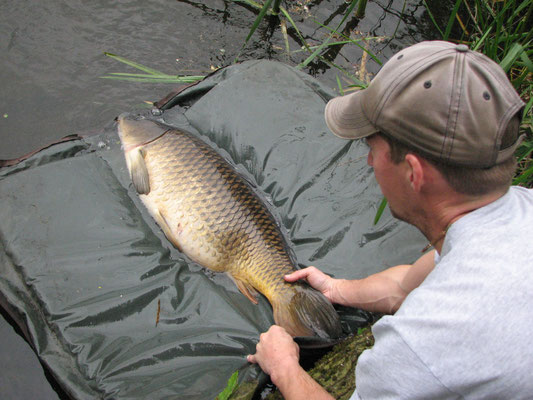 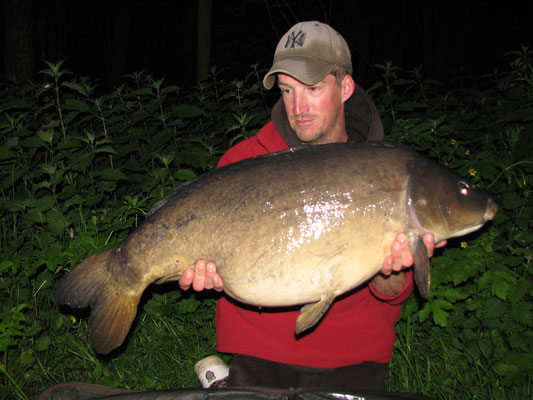 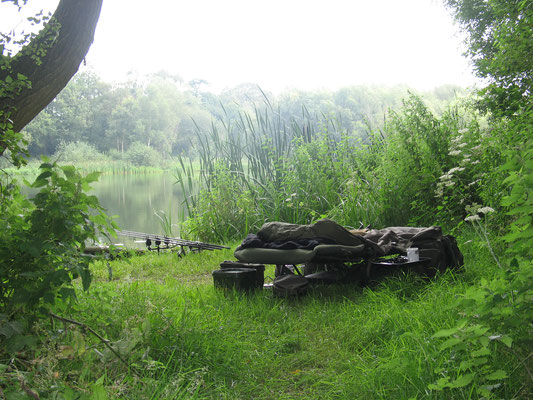