Having served a “proper apprenticeship” of over ten years, joining Stoke Angling Society in the mid-90s, was where the learning curve took on another steep climb. Redesmere was the premier water in Cheshire, possibly the North West at the time and that fact was reflected by the calibre of anglers who fished it, many were exceptional!

I had joined the club with three close friends and on our early trips we couldn’t help but notice everyone had a little pot of “special pop-ups”. Of course we had our own pots of homemade pop-ups, my weapon of choice at the time was Solar’s Quench mix, sieved to remove the coarse ingredients, and then added 60/40 to Nutrabaits Hi-Nu-Val, added to this was creamy super sweet powder, Hutchies original Autumn Harvest with a dash of Esterblend 12 and some sweet cajouser, all mixed up and rolled around a poly ball. It had caught me plenty of fish and my first Redesmere carp but we were about to receive a few pointers on how to make pop-ups better!

Nothing was given to us on a plate, we had to join up the dots and by that I mean we had to experiment, a lot! I have always said, forget all the scientific crap, the proof of the pudding is in the eating and that meant thousands of hours on the bank sitting behind various concoctions. Due to a closed season still being in place on many of the North West waters, we all fished where we could get on, depending where was open. We fished rivers and canals to park lakes and of course the Meres of Cheshire and Shropshire with the occasional flirt down South. Every kind of venue was covered from large to the tiny, rarely fished low stock to the busy circuit waters. Over the years that followed, through trial and error we had acquired an armoury of several combinations of ingredients, liquids and powders that when brought together into the form of a pop-up would turn the tables in our favour.

It wasn’t the fact of whether or not the pop-up caught fish, many did that. The ones that stood out were the combinations that caught fish consistently while all around caught nothing. The ability to turn up at a venue that had not done a fish for weeks, in some cases months and extract one, two sometimes as many as eight fish in a sitting was something that we became used to. Yes you have to be on the fish, I agree but that isn’t always enough to get a bite. If you had just eaten your Sunday dinner and an hour later headed out for a pint down your local, if you crossed your mate and he offered you a ham sandwich I bet you would pass on it, but if he offered you a piping hot chip covered with salt and vinegar I bet that smell would twist your arm into having “just one”. That’s what I compare our range of pop-ups to, the ability to nick you that one bite, turn an uninterested carp into one on the bank. Many tree-top observations have proved they are often the first bait taken when fished over a bed of bait, likewise when boating back out to a spot having received a take, often the freebies are still in the swim, indicating the fish has homed in on the pop-up.

Every flavour combination in our range of Hi Attract pop-ups has proven itself time and again, way before they were released to the public by Impulse, they were tested, re-tested and used for many years but never with the intention of being made commercially available. However when I helped set up Impulse over several years ago, the range that was in the pipeline at that time I could never have possibly backed, I would have never cast one out in a month of Sundays.

After much deliberation and reluctance I decided to make available my pop-ups, which I believe are like nothing you could buy off the shelf back then and even now. Many English 30s, 40s and several 50’s fell to the combinations during what I’ll call “the private years”, since being made available a lot of  big carp have fallen to them from all four corners of the country. Lake records and PB’s smashed, previously uncaught/unknown carp banked, whatever the sort of venue you fish you can cast one out with total confidence!

Orders that do not include bottom baits  code  PA1

Containing the same excellent flavour package as our MK2 pop ups this glug can not be mistaken. A fruity but powerful aroma can be smelt as you open the bottle, instilling confidence with every drop poured. This product can be used in conjunction with bottom baits, particles, pellets and ground bait.

These pack a real citrus zest punch, a winning flavour combination with added feed stimulants which were designed to go one step further at a time when half of the country were fishing pineapple pop ups. (during the mid 2000's).

Every pop up in our range has earned its place through many years of testing and producing consistent results whilst other anglers struggled for bites. Tropical Essence are no exception ! 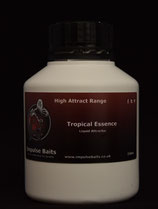 A flavour combination that has a real zest and citrus kick to it,which some will recognise. We use a PH buffer to keep the liquid in check due it been extremely potent, less is more with this fruity glug. This product can be used in conjunction with bottom baits, particles,pellets and ground bait.

During the "Testing Years" one combination that stood out more than most was the PMT. It combines dairy and fruit attractors that give off a fruity sweet, yet smooth and rounded aroma. First used on Redesmere where it proved its worth before it was taken to other waters in the North and then the South, where it accounted for numerous carp from difficult waters.

For some it is the first and only choice of pop up from our range, it continually produces the goods. The 13mm are superb for snow man presentations and the PMT combination complements most rolled baits on the market. A "Get out of jail" pop up at any time of year. 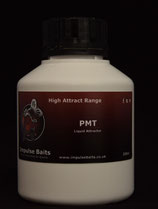 The PMT has been a firm favourite amongst the anglers who have tested it during the last year. A more mellow fruit/dairy combination than the others in the range, for the subtle approach. This glug is pink in colour and leaves an attractive cloud in the water columns. This product can be used in conjunction with bottom baits,pellets,particles and ground bait.

Strawberry never seemed to feature a great deal in big fish baits or pop ups, it still doesn't but one of our little group of anglers back then spotted the potential. Whilst been tested it went on to catch home grown fish to over 50lb, at a time when there not many about. It was hard not to sit up and take notice at the time, since then it has  been one of my all time favourites. Within my own angling I found strawberry to be an exceptional cold or deep water flavour. This pop not only smells too good to ignore, so are the results. 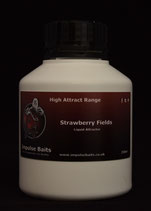 For those of you who know their flavours you will be aware that some strawberry's are better than others. We spared no expense when creating the strawberry fields and the same applies to the glug. Bar far the most expensive to produce but at the same time under used by many. This product can be used in conjunction with bottom baits, pellets, particles and ground bait.

An absolute classic combination of a timeless flavour and essential oil that has done the business consistently everywhere! There are many anglers that refuse to follow fashion in the bait world and opt to stick with proven flavour combinations with a great track record. Pepper Squids are a great alternative to a fruity pop up and one that has produced a number of 50lb plus carp. 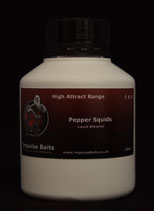 As mentioned above this flavour is an all time classic and contains the original Solar S+O .Very potent to smell but don't let that fool you as this glug cannot be over done. Do keep in mind this glug is black in colour and will change the appearance of any bait it's added too. This product can be used in conjunction with bottom baits, pellets,particles and ground bait.

Orders that do not include bottom baits  code  PA1