My story begins back in June 2015 when I received my ticket for the picturesque Rhododendron fringed Weston Park in deepest Shropshire. For those that aren’t familiar with the water, it is an old estate lake built by Capability Brown in 1812 and taken over by RH Fisheries in the late 90’s, who run and maintain the water in a sympathetic way providing comfortable fishing without ruining the aesthetics of the place.

I joined with a reasonable knowledge of the stock; a good head of upper 20’s and quite a few 30’s and of course the one on everyone’s list – a 40 + thick shouldered jet black Common.

After making the 45 minute blast up the M6 most Friday’s and catching consistently from the off I was enjoying my angling but was struggling to get amongst the bigger residents. I was taking plenty of fish to mid 20 but none of the biggies were succumbing to my tactics. The bigger fish were coming out, just not to me. I needed a change of approach. Fast forward to September and quite a few decent 30’s had been caught but the big one hadn’t been out since spring. I had to leave the lake for my enforced 2 weeks in the sun but I kept texting several mates so to keep in the loop, we were all excited that the big one was due, it was just a matter of when. I was hoping it wouldn’t be while I was away! Whilst basking in the sun, My brain started to form a plan of action.

Due to work commitments I, like many other anglers am limited to weekend angling. I usually fish a Friday night and normally the lake is at its busiest.  I had caught consistently on my favoured tactic of a boilie only approach over the summer, mixing 15 and 18mm baits so as not to draw caution to one size. Impulse Baits Apex Formula was my go to boilie for this water; the lake had been hammered on nut mixes and with the stock of large fish I felt a quality fish meal was the way forward.  Rig wise, it had to be something I have absolute faith in. Hinge stiff’s or multi rigs are my go to big fish rigs and I knew that my hooked to landed ratio confirmed my trust at the business end.  So, the plan was hatched and the baiting levels increased as September turned to October.

Previously I had been fishing for showing fish, following them round the lake and casting at shows and picking up plenty of the smaller stock,  however I had done my homework and I knew where the big Common had been caught from in the past. The Bay Swim and The Steps were where I needed to be,sadly this information was hardly a secret meaning both swims are very busy all year. I had only been able to get into the Bay Swim once all summer! I timed the last of my annual leave for the year to try and coincide with what I thought would be a bit less busy, giving me a chance of getting where I needed to be.

My head was all over the place at work. I told a few mates that I had a good feeling about the upcoming session but my stomach churned every time I thought about the big Common gracing the bottom of my net. The week dragged like never before and finally, my alarm sounded at 5.30am on Thursday morning and I was in the car and off like a shot, trying to get to the lake before first light. An uneventful journey saw me at the gate to the carpark and oh joy, not another car in sight. I had the place to myself … Result! After a quick walk round I dropped a bucket in the bay swim which is right by the car park and stood and watched the water for a few minutes. About two thirds of the way across there were a few Coots circling and acting rather strangely, seemingly picking up bits that were floating up to the surface. Fish disturbing the bottom I thought ? With nothing else to go on, this cemented my decision of swim choice.

After a brief lead around where the Coot activity was taking place, I felt a largish smooth silt area. This would do for two rods and the third would be down the margin next to an overflow sluice. I went in quite heavily with the bait on the open water spot – about two and a half kg’s with another thirty odd baits just before dark. After a very quiet first day and night I was having major doubts in my swim choice. There were a lot of fish crashing out in front of the Woods Swim further down the lake. After a couple of calls to mates, I was in two minds whether to move onto the fish or stay put. Dilemma! I wound in and went for a walk to the swim they were in front of. It was late Friday morning and I knew the weekenders would be arriving in a couple of hours. I had to decide quickly. I watched fish after fish show but they were all much smaller than the prize I had in mind! My mind was made up. I went back to my swim, got the throwing stick out and put another kg on my baited area in open water.

Ihad a walk round to the Boat House Swim for a chat with a lovely chap who was in there to kill a bit of time. I went back to my swim and made some lunch and rested the swim for another couple of hours hoping the fish would get onto the bait with confidence having no lines in the water. I rebaited the rods and put them out mid-afternoon. The left hand rod went down the margin to a small stand of Lilies and I put one rod only onto the open water spot with a few stick full’s of bait over each. It was about this time that the noise started. In the field behind the lake was a runway where a small airshow was taking place. They were buzzing around, really low, really fast and really loud like a swarm of angry Hornets – would this kill the fishing? I prayed not! As I was eating my dinner a little later one of my alarms let out a couple of bleeps and the left hand rod tip pulled round. I was on it quickly to stop the fish getting to the pads. I gave it the full curve of the rod, which turned out to be too much as the hook pulled within seconds. Bugger! At least the fish hadn’t been put off by the noise.

Before dark I put another 50 baits over my open water rod. For some reason I had a good feeling about the spot as there was still activity with the odd bleep and show. However, after another quiet night my confidence had gone from one extreme to the other. I made my mind up to call it a day at 10am so it came as some surprise that at 8.45 as I was mid way through a cup of tea that my line tightened, pulling the bobbin up and the line out of the clip and the alarm letting out a few bleeps. I lifted into a solid resistance that immediately kited right on a tight line towards the centre of the lake. All of a sudden, a massive lump came tail walking out to its wrist like a big game fish and dived straight back down ploughing away from me, the clutch going into meltdown and my nerves doing the same! The fish was heading for the sluice and I had to stop it before it got near – it would cut the line like cotton if it touched the concrete. I managed to turn it with a few yards to spare and continued to give it everything to try and get it back into open water. The fish continued to charge around the lake, seeming to head for every snag and overhanging branch – it really did not want to be caught! I started to gain a bit of control and turn by turn I reeled the thing towards me. It surfaced and I saw the massive shoulders and my knees went to jelly. Ask anyone; I get excited playing a mid double, this was a whole different kind of nervous. I fluffed the first attempt at the net but by this time the fish was beaten and went in at the second time of asking, it’s nose kissing the spreader block and most of its tail till not over the cord. It was big. No, it was massive!  Way bigger than I had expected it to be. I rolled it onto its side and was able to confirm that I had indeed only gone and bloody done it! The big one was mine. I secured the net and ran to the next swim to wake Ethan. I let out a babbled stream of words about gigantic Common, net, caught it, result and he ran off to get Jason from further down the lake to help out.

We got a bucket of water and zeroed the scales, set the mats up and made sure we were ready to give the big girl all the care she needed for her brief trip onto the bank. She was as good as gold in the net as I cut the rig off and unhooked her. I called a good friend, Chris who lives locally and also happens to be very handy with a camera. He arrived fifteen minutes later, camera in hand ready to do the honours. I broke the net down and lifted the fish onto the mats and into the sling. She looked amazing. We carefully lifted the sling up onto the scales and I let the lads read the weight off to me. 42lb 8oz. Wow! A new PB and my first 40 and what a 40 as well! Chris clicked away with the camera doing an excellent job as usual and we both got into the water to take a few return shots. I held her for a few moments as she regained her composure and watched her swim away, none the worse for wear. I was in a daze as we shook hands and the lads congratulated me – sharing moments like this with friends is what makes carp angling for me. 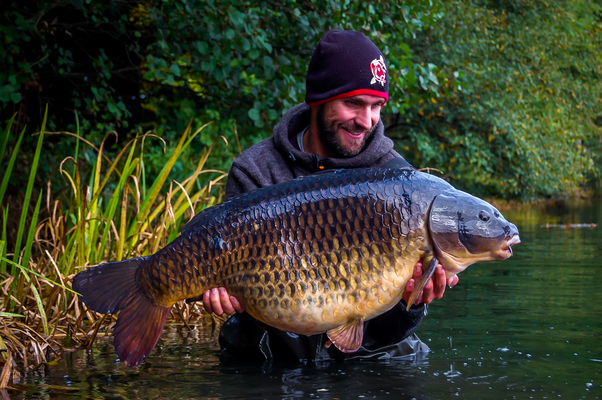 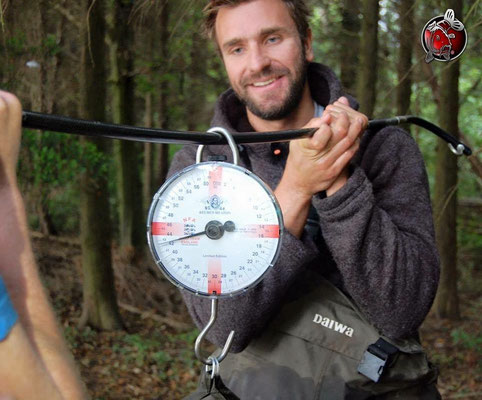 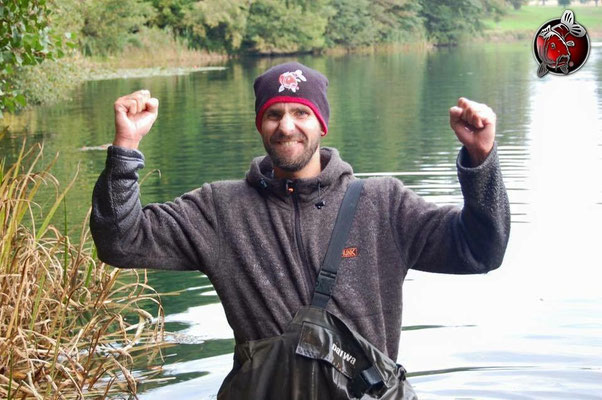