Each year we hold our company social at Wraysbury 1 and with 25 anglers filling the banks it's always a weekend in my diary that I look forward too. This year’s trip was to be are last due to all the changes happening at the complex come next spring. With that in mind I knew this could be my last chance at catching one of the larger residents that inhabit the lake.

The weather conditions were due to change over the 2 days which suited the area I was in. A low pressure band had been slowly making its way south and with it came the rain. Conditions really couldn’t have been more perfect, with a steady wind pushing into Cigar Island and a further pressure drop due this had to be the time!

Springates Point allows you to cover a good sized area of water and if the peg next door is vacant you have a clear run to cigar island. Running along the front face of the island you can see there are several coves that the overhanging trees have created. Some of these are only a couple foot deep closer to the island and can be very weedy. However after leading around in each cove it became apparent that some were clear and quite a bit deeper than the others, in my mind these were areas that had been fed on recently and remained clear. I opted to fish a tight area two thirds up the island, it wasn't the easiest of casts but each and every time the lead went down with a reassuring "donk".

At first I thought it best to go easy on the bait and try to build the area up if the bites were forthcoming. With the rig in place the swim was baited with around 10 spombs of mixed Apex ground bait, pellets and chopped Apex boilies from Impulse Baits. This was then soaked in a new winterised oil we have been playing around with to good effect. Iam not one to over complicate my rigs but with that said I do like to offer something slightly different on the hair to what the carp see every day.

A size 4 Korda Kaptor wide gape hook mounted blow back style with a 5 inch hook link is as simple as it gets in my mind. The hook bait itself incorporated 2 half sections of an Apex wafter tipped with an Enterprise Tackle red corn stop to add some visual. However my main concern was dropping the lead if I was fortunate enough to get a pick up. The Impulse Angling lead clip systems are perfect for this exact situation, meaning I only have to slightly push my tail rubber on for the cast but upon the take the lead discharges pretty much straight away.

With all three rods now fishing effectively and the weather on my side it was only a matter of time. Late that evening the rod fished in the island cove signalled a few bleeps, fishing locked up that was enough for me and I bent into whatever was attached. A short lived battle followed by a hook pull had me standing in the rain, rig in hand wondering what had just happened.

With the fish present I decided to up the bait quantity a little, a few spombs before bed then I would assess the situation again come morning.

With the break of dawn came motionless bobbins however the conditions were still right and I felt I needed to add a little more attraction to the area. Most of the remaining 10kilo of Apex Mix I had left was deposited in the island cove before replacing the rig. Throughout the morning I could see the odd slick spot coming up from the area. I felt another take was on the cards but little do I know just how memorable it would be.

Three bleeps on a locked up island rod had me running for the rods. Instantly connecting with a powerful fish I started to shake. All types of thoughts run through your head when fishing a water with possible 50lb carp swimming around.

The fish kited out away from the island towards open water, staying deep and using its weight rather than shaking it's head which signified it was a better fish. It was only when the fish lifted slightly in the clear margin I realised just how big it truly was. Upon the second time of asking the creature slipped over the net cord. Diving through the weed I was greeted by a huge set of shoulders staring back!

Finally I had done what I'd set out to do, to catch a Wraysbury chunk!

With Mikes Pet now wallowing in the bottom of my net at a weight of 49lb you could say all was well in the world. The full emotions don't really sink in at first however it's a moment I will truly never forget. 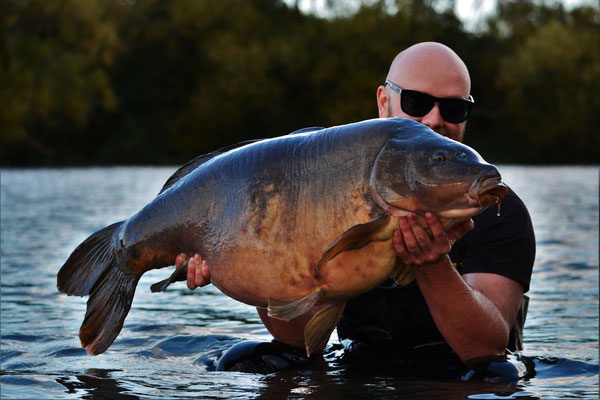 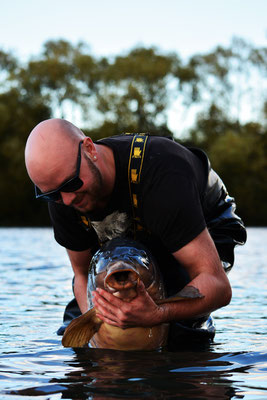 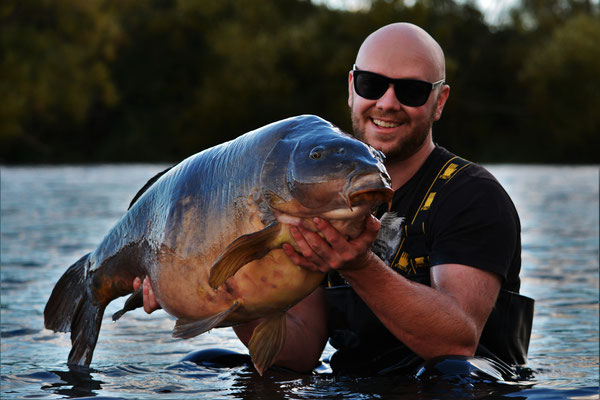