Confidence in my approach is something I have never lacked, even when you drop the odd fish at the net you have to tell yourself “You don’t always win”. That’s not to say it hurts any less.

To date I have landed 54 fish from the Church lake with a 100% hook to land ratio, that was until losing two fish during my time in a peg known as Scooters. One fish been Roger a rather large two toned mirror that I was lucky enough to have banked earlier on in the summer of 2019 at 49lb. 6oz. It hurts to lose any fish but that’s how angling goes sometimes, I can only put it down to hot weather and lethargic feeding habits of the carp.

As we moved into early September, I had two nights ahead of me and i was determined not to spend it in Scooters, even if the fish were waving at me I would resist! As luck would have it the fish were settled in an area out in front of Captors, this suited my approach for the time of year. A good quality boilie with the added attraction of particle and liquids. Having fished Captors on many occasions I knew a couple of areas where presentation would be on point and a comfortable range to keep the swim topped up, should the fish play the game.

It will come as no surprise that both of my rods were baited with Mk2 pop ups, these have accounted for so many of my captures on Church lake. Anyone who has visited my swim will know it is my go-to pop up and I would highly recommend you try them for yourself .

Fishing the rods only feet apart I generously spread 7kg of mixed particle and Apex boilies over the top. That may seem a lot of bait to most anglers but you have to think the fish in Church are not of your average size. As darkness gave way to a dim early morning light, I could hear the odd carp rolling in the distance. I couldn’t make out exactly where due to a dense mist that was sitting over the water. The ripples were strong enough to be reaching my margin so they couldn't have been too far away.

I'm sure we have all been there at some point, sat on your hands waiting for one of the bobbins to twitch slightly or the line to rise from the water before the alarm had made any indication! Sadly, it was not to be that day. Something wasn’t right? Could it be that my rig was sitting oddly on the bottom? I decided to pull the rods in and make a slight alteration in the height my pop ups were sitting off the bottom. At first, I had opted to keep it fairly low at only an inch but I felt an increase to 2 inches would give me a better chance of getting a tug !! On the line …..

With my Mk2’s now standing proud of any debris lurking on the bottom I could retire to my bedchair for some much needed relaxation. Short lived and not really relaxing, it was a little past midnight when I was stood at the water's edge attached to a heavy resistance. With a little backwards and forwards and a few nervy moments where the line pinged of the dorsal fin, a well proportioned mirror lay waiting in the net. A quick flick of the head torch revealed my 12th UK 40 pound carp and my 3rd in only 4 months.

With the help of a good friend we hoisted the scales to 42lb 4oz, a carp which we recognised as the Dynamite Fish and an old friend of mine. After the standard pictures and back slapping the rod was replaced and so was my horizontal position on the bed. I can remember it been distinctively warm that night and I found it hard to drop back off. If it wasn’t the heat it was the incessant buzzing around my ears where the local wildlife were feasting on me. I genuinely felt like a Mcdonalds drive through for all and any midges wanting to feast, if only I could charge them £££.

4am on the dot and the same rod was off into Linford mode {80’s sprinter for the young ones} connecting with an angry carp everything felt different to the last fish. The fight was full of head shakes and sporadic movements, signifying a small offender was on the end. Sure enough a small common popped up and headed straight over the draw cord.

At 23lb 3oz it was the last fish of a very pleasant trip; it would be a few weeks before I could return but what a return it was set to be, the next chapter will be my last for the season of 2019. Bringing all the highs and lows to a climax as well as taking a moment to reflect on my time spent with good people and big carp 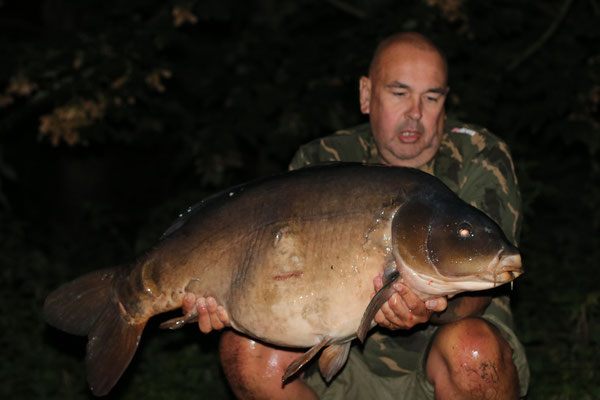 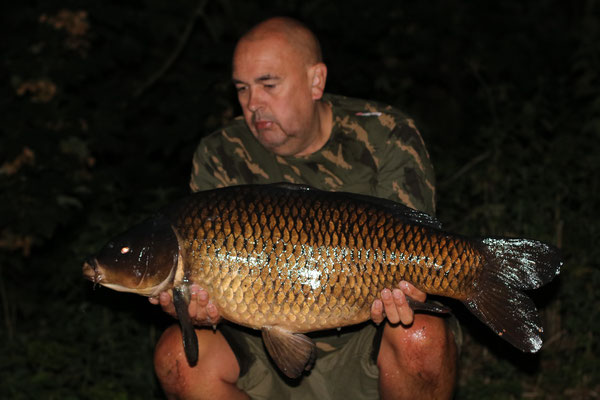